Sign of The Times: The Threepenny Opera Revival in Dublin

In 1928, when Bertolt Brecht and Kurt Weill’s anti-establishment musical The Threepenny Opera opened in Berlin, there were hints of what was coming around the corner for Germany and the world. As a new version opens at The Dublin Theatre Festival, its director Wayne Jordan tells me why this very adult musical ripe for modern times.

Over the past five years, as the breakdown of the European financial system has created a new hierarchy, and the growth in poverty has seen a new rise of the right wing, fascistic developments such as the Russian anti-gay propaganda law are a frightening reminder of the persecution of scapegoated minorities at the core of Nazism as it began to take hold in of a financially deprived Germany during the late 1920s.

The other side of the coin in the cash-strapped Weimer Republic was a creative flowering of the underground and a kind of Utopian society, where for the first time in the modern world, lesbians and gay men found freedom to be themselves. Into this mix, in 1928, a new musical opened, written by 30 year-old playwright Bertolt Brecht and his 28 year-old collaborator, the composer Kurt Weill, that fused the idioms of cabaret, vaudeville and music hall with grand opera, to comment on the economic and political morality of the time. By 1933, when Brecht and Weill were forced to leave Germany Hitler, the musical had been translated into 33 languages and performed over 10,000 times. In the intervening years, its influence has been felt not only across the development of musical theatre, but the civil rights movement and the entertainment industry.

“Given what’s happened with the banking system, it’s incredibly current in the things it has to say about money and how it’s organised,” he says. “And how poor people are treated by those who organise it.”

Set in London’s Soho, just before the coronation of Queen Victoria, where the notorious bandit and womaniser, Macheath (known as Mack The Knife), has secretly married, Jenny, the daughter of Jeremiah Peachum, the boss of London’s beggars, the musical is loosely based on John Gay’s The Beggar’s Opera, which satirised the rise of the burgeouis class in 18th Century England by giving the songs usually sung by kings and queens in Handel’s operas to beggars and prostitutes. A whole host of shady characters become embroiled in a power struggle as Peachum and his wife vow to destroy Macheath through whatever means necessary, and the corruption at the heart of their capitalist hegemony is exposed.

“One of the criticisms of the The Threepenny Opera is that it hasn’t been successful as a polemic because it’s so enjoyable and so much fun,” says Jordan. “I disagree with that, because if it wasn’t so much fun, it wouldn’t have lasted for as long as it has, and communicated with as many people as it has.

“But I do think that the way in which we can talk about poverty and obscenity and vulgarity is different to how this play would have been received in Brecht’s time, when it shocked Germany. How do you create that sense of attack and the electricity of what Brecht and Veil were doing and make it fresh for a modern audience at the same time as not wanting to alienate them from the work?”

The answer, Jordan believes, is in Weill’s music and how it operates within the context of Brecht’s play. “The way in which it uses music is startling. The sounds are really shocking and the way the music is related to the action is very dynamic. I’m quite interested in Brecht and his ideas about the openness of actors who are always ready to sing, the heightened quality of the performance.

“It’s an adult musical, not in an X-rated sense, but because it makes us think about how we live, and also in terms of what it does as a piece of theatre, how the characters work, how the jokes work, how the music works in relation to the action. It’s really sophisticated and complicated in one way, but it flows in the most extraordinarily natural and free way.”

Although Rogers and Hammerstein’s Oklahoma!, written 15 years later, is generally considered the cornerstone of the modern American musical, The Threepenny Opera is also foundational, particularly to the work of more edgy writers and composers, such as Kander and Ebb, Steven Sondheim and  Schönberg and Boublil.

“They mightn’t have used the idiom to the same ends as Brecht and Weill did, but you can hear the sounds coming through. I was listening to Les Miserables recently and there’s a song in it, ‘Lovely Ladies’, which makes you think of The Threepenny Opera. It’s interesting to think of how far-reaching its influences are, and how it continually pops up in musical theatre.

Of course, Brecht and Weill’s songs not only underpin the evolution of musical theatre. The show’s most recognisable song, ‘The Ballad of Mack The Knife’ became a jazz-crooner standard when Bobby Darin had a hit with it in 1959, while the second most famous song ‘Pirate Jenny’, became a civil rights anthem when Nina Simone recorded it in 1964, while Bob Dylan has often cited the song as a major influence. In the world of pop music, the likes of Soft Cell and The Dresden Dolls not only appropriated the atmosphere of The Threepenny Opera, but recorded its songs too. Ex-Doll, Amanda Palmer still sings ‘Pirate Jenny’ as part of her politically engaged solo set.

Although the new Dublin production is a big one – a cast of 19 on stage with a band consisting of eight members – Jordan is bringing it back to basics.

“We’re going a sound that was contempary in the 1920s, because it’s an exciting sound. The way in which we can talk about poverty and obscenity and vulgarity is different to how this play would have been received in Brecht’s time, but the sound they created, which was rough, raw and popular, while not sacrificing intellectuality, still works. At the time it was written there was the possibility of a pluralistic future for Germany, as well as another future, the one that actually happened. They were at the coalface of history, and in the context of the world we live in now, it’s the exciting, different and hard-hitting of musicals.”

The Threepenny Opera runs at The Gate Theatre from September 26 to October 12 as part of The Dublin Theatre Festival, www.dublintheatrefestival.com

Once Upon A Time: A Review of the musical, ‘Once’.

Before the musical version of the film Once stormed the Tony Awards in 2012, the last Irish musical show to hit it big on Broadway was Riverdance. There are hardly any comparisons to be drawn between the two productions, yet there is one central strand that links them. Although Once is an intimate show with a small cast, one set and limited dance scenes, it sells a kind of staged Irish mythology that is both timeless and epic in scope. 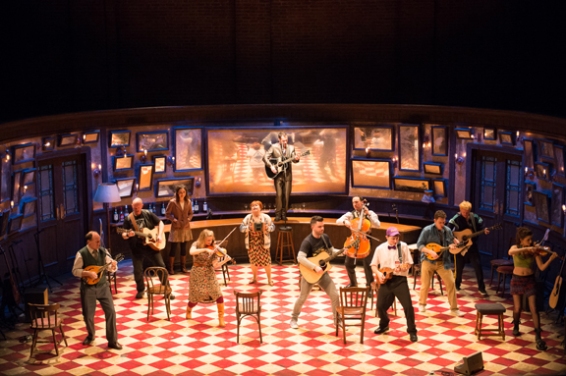 The film, released in 2006, told the story of a short, intense love affair between two outsiders in a Dublin that was strangely devoid of modern conveniences, even though it was set at the peak of the Celtic Tiger. In the stage version, the outsiders, simply named ‘the guy’ and ‘the girl’, are rooted in modern, downturn Dublin, yet at the same time it’s boom-time Dublin, with its influx of optimistic immigrants, and Dublin in the rare ‘ould times, with its pub setting and supporting cast, who could be from a Sean O’Casey play, albeit a bilingual one.

‘The guy’ is a jaded busker, plying his trade on the streets of the Irish capital having been ditched by his New York-bound girlfriend, and ‘the girl’ is a Czech single-mother who happens upon him one day and sets about opening him back up to the love of music, and as a byproduct, to love itself.

As if to get it done and dusted, Glenn Hansard and Marketa Irglova’s Oscar-winning song, Falling Slowly comes very early in the proceedings, as it did in the movie. It was a good decision because not only is the song the glue that holds these two characters together for the rest of the show, it’s an exquisite, goosebump-inducing moment that seals the show as a hit from its plaintive opening chords.

Much of this is to do with the chemistry between Declan Bennet and Zrinka Cvitestic (who take Hansard and Irglova’s roles), along with their perfectly balanced voices. Cvitestic’s version of ‘the girl’ is far more feisty than Irglova’s – she’s the energy that drives the show forward and whenever she’s on stage it’s almost impossible to take your eyes off her. By contrast, Bennet is a still presence, even when he’s belting out lovelorn ballads. He’s the Ireland of old, she’s the new day dawning.

When the two visit a bank manager to get a loan so they can go into the studio to record ‘the guy’s’ songs, there’s a speech about Ireland’s cultural currency shining on as our reputation on the international markets is tarnished. It drew a spontaneous round of applause from the audience on opening night, which included Ireland’s President Michael D Higgins. It’s telling that Cvitestic is the one who eulogises Ireland’s artistic contribution to the world. It’s the outsider’s idea of the Irish that as a nation we’re so entranced with.

There is a hugely resonant Irish musicality to the show too, mixed with a little Eastern European flavour. Each of the cast members plays an instrument, and as the audience arrives in the theatre they’re having a singsong on the stage. This blends into a kind of sing-along quality throughout the proceedings, dotted with showstoppers written by Hansard and Irglova, which are somehow as life affirming as they are despairing.

The test of this show’s, and its director, John Tiffany’s mettle is in its ability to keep an audience riveted, despite having a story that could be told in two sentences, virtually none of the tropes that are usually part of musical theatre, and no pay-off whatsoever. And boy does it keep you riveted, delivering as many belly laughs along the way as there are genuinely heartbreaking moments.

It’s a show about love, not only between soulmates, but between the world and a dream of Ireland it has come to believe in. As you walk out the door, humming the reprise of Falling Slowly, you find yourself believing the dream is real.