Once Upon A Time: A Review of the musical, ‘Once’.

Before the musical version of the film Once stormed the Tony Awards in 2012, the last Irish musical show to hit it big on Broadway was Riverdance. There are hardly any comparisons to be drawn between the two productions, yet there is one central strand that links them. Although Once is an intimate show with a small cast, one set and limited dance scenes, it sells a kind of staged Irish mythology that is both timeless and epic in scope.

The film, released in 2006, told the story of a short, intense love affair between two outsiders in a Dublin that was strangely devoid of modern conveniences, even though it was set at the peak of the Celtic Tiger. In the stage version, the outsiders, simply named ‘the guy’ and ‘the girl’, are rooted in modern, downturn Dublin, yet at the same time it’s boom-time Dublin, with its influx of optimistic immigrants, and Dublin in the rare ‘ould times, with its pub setting and supporting cast, who could be from a Sean O’Casey play, albeit a bilingual one.

‘The guy’ is a jaded busker, plying his trade on the streets of the Irish capital having been ditched by his New York-bound girlfriend, and ‘the girl’ is a Czech single-mother who happens upon him one day and sets about opening him back up to the love of music, and as a byproduct, to love itself.

As if to get it done and dusted, Glenn Hansard and Marketa Irglova’s Oscar-winning song, Falling Slowly comes very early in the proceedings, as it did in the movie. It was a good decision because not only is the song the glue that holds these two characters together for the rest of the show, it’s an exquisite, goosebump-inducing moment that seals the show as a hit from its plaintive opening chords.

Much of this is to do with the chemistry between Declan Bennet and Zrinka Cvitestic (who take Hansard and Irglova’s roles), along with their perfectly balanced voices. Cvitestic’s version of ‘the girl’ is far more feisty than Irglova’s – she’s the energy that drives the show forward and whenever she’s on stage it’s almost impossible to take your eyes off her. By contrast, Bennet is a still presence, even when he’s belting out lovelorn ballads. He’s the Ireland of old, she’s the new day dawning. 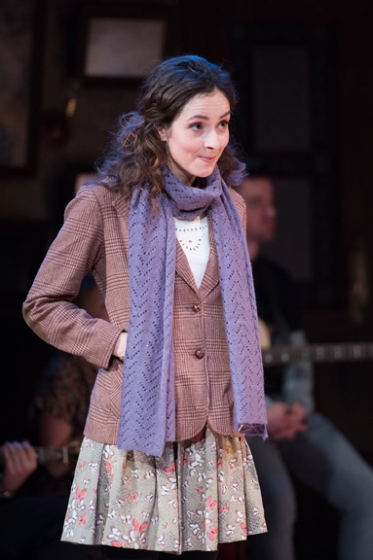 When the two visit a bank manager to get a loan so they can go into the studio to record ‘the guy’s’ songs, there’s a speech about Ireland’s cultural currency shining on as our reputation on the international markets is tarnished. It drew a spontaneous round of applause from the audience on opening night, which included Ireland’s President Michael D Higgins. It’s telling that Cvitestic is the one who eulogises Ireland’s artistic contribution to the world. It’s the outsider’s idea of the Irish that as a nation we’re so entranced with.

There is a hugely resonant Irish musicality to the show too, mixed with a little Eastern European flavour. Each of the cast members plays an instrument, and as the audience arrives in the theatre they’re having a singsong on the stage. This blends into a kind of sing-along quality throughout the proceedings, dotted with showstoppers written by Hansard and Irglova, which are somehow as life affirming as they are despairing.

The test of this show’s, and its director, John Tiffany’s mettle is in its ability to keep an audience riveted, despite having a story that could be told in two sentences, virtually none of the tropes that are usually part of musical theatre, and no pay-off whatsoever. And boy does it keep you riveted, delivering as many belly laughs along the way as there are genuinely heartbreaking moments.

It’s a show about love, not only between soulmates, but between the world and a dream of Ireland it has come to believe in. As you walk out the door, humming the reprise of Falling Slowly, you find yourself believing the dream is real.